A Mumbaikar's journey against cancer : Story of Shekhar Jha 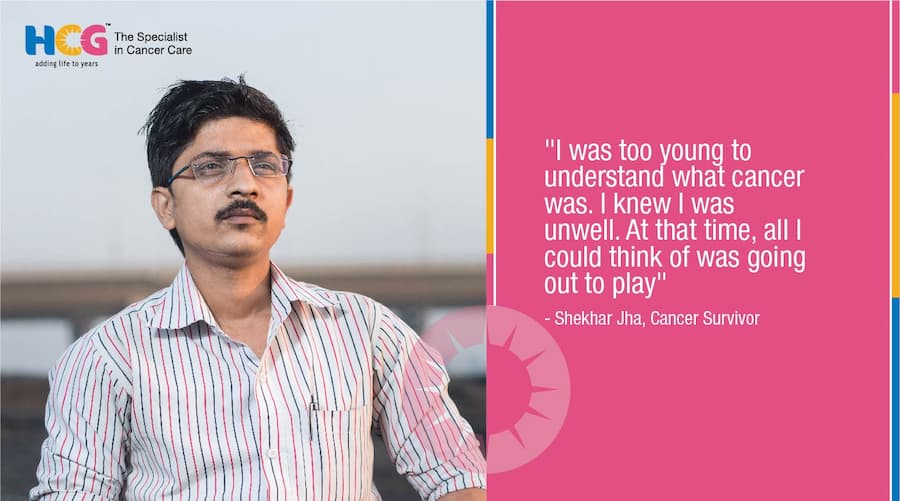 How Cancer Made A Man Fall In Love With Mumbai.

Mention Mumbai and you get a mixed bag of superlatives. It is home to the filthy rich and the dirt poor; business tycoons and street-side hawkers; Bhendi Bazaar and, yes, Bollywood. Maximum City produces heroes not just on the silver screen, but also among ordinary people in extraordinary circumstances. One such young man is Shekhar Jha, who first visited Mumbai when he was just six. The year was 1992, but this was no holiday: he had just been diagnosed with Hodgkins Disease, a type of blood cancer. Hailing from a small town in Bihar that had no facilities for treatment, his family was referred to a hospital in Mumbai.

“I was too young to understand what cancer was. I knew I was unwell because I was undergoing so many tests and had to take so many injections. When you are young, all you think about is going out to play. Even when you are sick, that is all you can think about,” recalls Shekhar..

“I had come to Mumbai for a routine check-up. By then, I had read that this was one of the best cancer hospitals in the country. That was the first time I realised that I might have had cancer all those years ago. So, I asked my parents and they said, ‘Yes, you had cancer, but you are better now.’

Ignorance can be bliss at times. His parents’ stoic but dedicated approach to treating his cancer probably helped him coast through it without added stress. He laughingly recalls an incident from his childhood, when he lost some hair after chemotherapy. “My friends in the village said that I was a hero who had come back from Mumbai with the latest hairstyle. I did feel a little annoyed that they were teasing me, but was also amused I was being called a hero.”

Over the years, Shekhar kept returning to Mumbai for his check-ups. In 2010, while pursuing a degree in commerce, a doctor at the hospital suggested that he give back something to society. “He told me that we do so much for ourselves but should do something for others too. He advised me to join a cancer support group where I would find like-minded people who could help me get rid of my sense of isolation.”

“I was very interested in cricket and had even played at the school and college levels. But my family was not well off enough for me to take up sports as a career. So I decided to focus on my studies. I was an average student, but I completed my Masters’ degree and returned to Mumbai, this time to look for a job and settle down in this city – it has become my second home.”

Keeping his promise to his doctor, Shekhar joined Ugam, a support group for those affected by childhood cancer. He was so involved with it he was soon offered full-time employment there.

“The groups made me realize that I am not alone and that there are others who have been through what I have. The people here drew me out of my shell and helped me open up to others.”

Shekhar’s wife Rekha, whom he met in Mumbai, was very accepting when he told her about his diagnosis as a child. “Ours is a love marriage, and I was very honest with her. She said the only thing that mattered was that I was fine now.”

“Even as child, I felt that I would settle down in Mumbai. People here have a very positive attitude. In the village, they tend to gossip and bear grudges. I have never liked that. People here care for each other but mind their own business. Also, they are constantly trying to better their lives.”

Bollywood city has also imparted to him a love for music, which he sees as a mood elevator. “When I lived alone here, I would come as often as I could to Marine Drive and listen to old Hindi film music. My favorite singer is Mohammed Rafi. I also like Kishore Kumar and Lata Mangeshkar. I would listen to their solo romantic songs and feel happy. And then I would go home relaxed.”